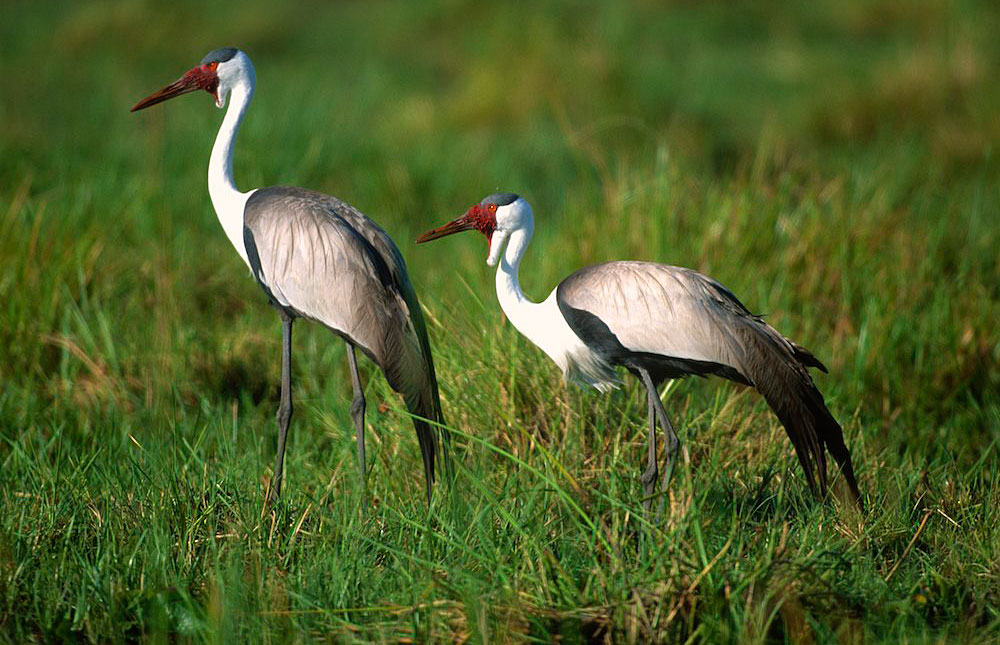 Posted by: Posted on: April 20, 2016
About 860 species of birds live in the highlands, Lowlands, river banks, wet lands, dams, lakes, forests, shrubs and grasslands of Ethiopia. The number, diversity and color of birds found in the country have power to interest even the non birders. With regards to number of species Ethiopia stands next to South Africa, but the country possess a higher number of endemics and semi-endemics which it shares with Eritrea.

A scenic drive through the lush fertile valleys of Goha Tsion, as we pass through the Sululta Plain we can see Black-winged plovers, Wattled Ibis, Blue-winged geese, Common Cranes and Wheat ears.
On arrival at Debre Libanos, we will first stop at the Jemma River gorge. Here at the gorge (and in the forest around the church) we can expect to see the Banded Barbet, the Black-headed Forest Oriole, the White-billed Starling, the Red-billed Starling, the White-winged Cliff Chat, the White-backed Black Tit, the White-cheeked Turaco and Hemprich’s Hornbill. We will also see one of Ethiopia’s endemic mammals, the Gelada or bleeding heart baboon. (In the gorge we will see a variety
of vultures – Lamergeyer’s, Ruppell’s and Lappet faced vultures.)
Overnight Debrelibanos

After a comforting cup of hot coffee at Ethio-German Restaurant we leave on the exploration for the songs of morning birds. We then enjoy the rest of the day by visiting the monastery of Debre libanos. It is a religious center and monastery which was established in the 13th century by Saint (Abune) Tekle-Haimanot. It is famous for its miraculous spring. The new church that stands beneath a cliff on the edge of the gorge has beautiful stained glass windows and mosaic figures on the façade. Nearby is a bridge with much similar to that of the Portuguese in Tis Abay. Experience the breathtaking sweeping view of the Blue Nile Gorge. Return back to Addis Ababa in the mid afternoon.
Overnight Addis Ababa

After breakfast, start driving to Ankober, the 18-19th C capital. From the town of Anokober, there are marvelous views over the escarpment, and for ornithologists there is the chance of seeing the very rare Ankober Serin, and other species such as Smith’s Francolin, Yellow Throated Serin, White billed Starling, Black-winged Love Bird, Lammergeyer, Mountain Buzzard, Peregrine, Red-breasted Sparrow Hawk, Alpine Swift, Crag Martin and Blue Rock Thrush. Wildlife recorded in the area includes: Leopard (rarely seen), Colobus and Vervet Monkeys, Gelada Baboon, Menelik’s Bushbuck, Klipsringer and Rock Hyrax, which despite its small size is a distant relative of the elephant.
Overnight Ankober Lodge.

After a comforting cup of hot coffee at sunrise we leave on our morning bird watching trip returning for breakfast around 09h00 at lodge. After breakfast e departs for Addis. On the way we will visit the old town of Debre Berhan, some 130 km from Addis Ababa on the Asmara Road. The great Emperor Zera Yaqob (1434 – 1468) made his imperial capital here, after seeing a “heavenly light” visitors also see the church of Selassie which Emperor Menelik restored in 1906.
Overnight Addis Ababa

After you get a nice sleep, Early in the morning drive to Awash. Heading south down the Rift Valley we turn east at Mojo for Awash and the Afar Region. We pass Lake Beseka and enter the Awash National Park. On arrival we could take a leisurely walk passing through the patch of natural forest at the northern end of Elalaytu hill. On our way, we may encounter the following bird species: Black Scrub Robin, Somali Golden Breasted Robin, Nile Valley Sunbird, Lineated Pytilia, Yellow Throated Serin, Sombre Chat and Arabian Bustard.
Overnight Awash Park, Lodge

The next day we could do an early morning game drive – visit the birds, which are found around the lodge, returning to the main road and proceeding to Langano, Bishangari.
Overnight Bishangari Lodge

Bishangari, which means ‘Sweet water’ in Oromo Dialect, is situated adjacent to an ancient forest that remains intact due to inaccessibility and it is blessed with five ecological zones. Here, we expect Cliff chat, Nightingale, Warblers, Flycatcher, Laughing Dove, Wood Owl, Abyssinian Nightjar, Glossy Ibis and Silver Bill can be seen not far from the Lodge. Overnight Bishangari Lodge

After an early breakfast we drive to Shalla and Abijata National Park. Shalla 270 mts in depth, the deepest in Ethiopian rift, is an important breeding site for birds on its four of the nine islands. We then drive through the Ostrich Farms on the west of the main road. Proceed to Abijata lake, where thousands of both lesser and greater Flamingo’s congregate along the shores. African Pochard, Avocet, Gull-billed Tern and Pintail, little Stint, Ruff and a variety of ducks are among other species to be seen. Drive to Wondo Genet (There is naturally heated open air pool) set among forested hills. In the gardens of the hotel and juniper Forests behind the hotel, we will see the silvery-cheeked Hornbill, White -cheeked Turaco, Yellow-fronted Parrot, Black-headed Forest Oriole, golden-backed Woodpecker, Red wing Starling, Grosbeak Weaver, Mountain Wagtail and Black-roughing Swallow. We can also see Columbus monkey, Anubis baboon and Bushbuck.
Overnight Wondo Genet Lodge

you sip your early morning coffee as you leave on your early exploring of Birds followed by breakfast at 09h00 at hotel. The rest of the day will be exploring the Yabello sanctuary searching for birdlife and other animals.
Overnight in a hotel

On the way to Negele we explore the forest around the town of Arero. In this forest, about 168 species have been recorded including 2 endemics that are among most sought-after birds in Africa: Prince Ruspoli’s Turaco Salvadori’s Seedeater.
Overnight Negele

Continue to Goba and the Sanetti Plateau, driving on the highest road and moorland in Africa. On the way we look at; Golden backed woodpecker, White backed Tit.
Overnight Goba

Full day birding in Bale National Park and return to Goba with a chance to see; Lemmergeyer and Abyssinian Catbird.
Overnight Goba

Drive back Addis Ababa, Continue to Lake Ziway with some stops to visit the Oromo villages. Lake Ziway is not only for its scenic qualities, but also for the large congregations of water-associated birds that are attracted to the redlined fringes by a thriving tilapia population.
In the evening, you will have a Dinner invitation by Addis Tour. Here you will enjoy and experience several tribal dance plus taste Ethiopian traditional food.  Departure.